Hello for the second (and last) part of EFL Rome2017 post! You can find previous one here

Here goes the big name, Joe himself. While it may suggest a lot about music, it was more about messaging and integration. Joe showed how he could remotely control Sonic Pi. He was glad that there’s an other way to control a program “than clicking a bloody mouse!”.

He did that sending properly coded messages to UDP port. And here it all started. Joe is a big supporter of messaging based communication. API suposes a programming language, so it’s not a best way - you’re tied to programming language. As the main topic emerged once again - how to integrate and there are some programming languages better to do other things - so you’d naturally like to use them for specific purposes and not be stuck with one.

You should also treat specific parts/modules/apps like a black boxes - you know nothing (even the language used) except for how to communicate (using messages, of course ;) ) - “the protocol only matters.” 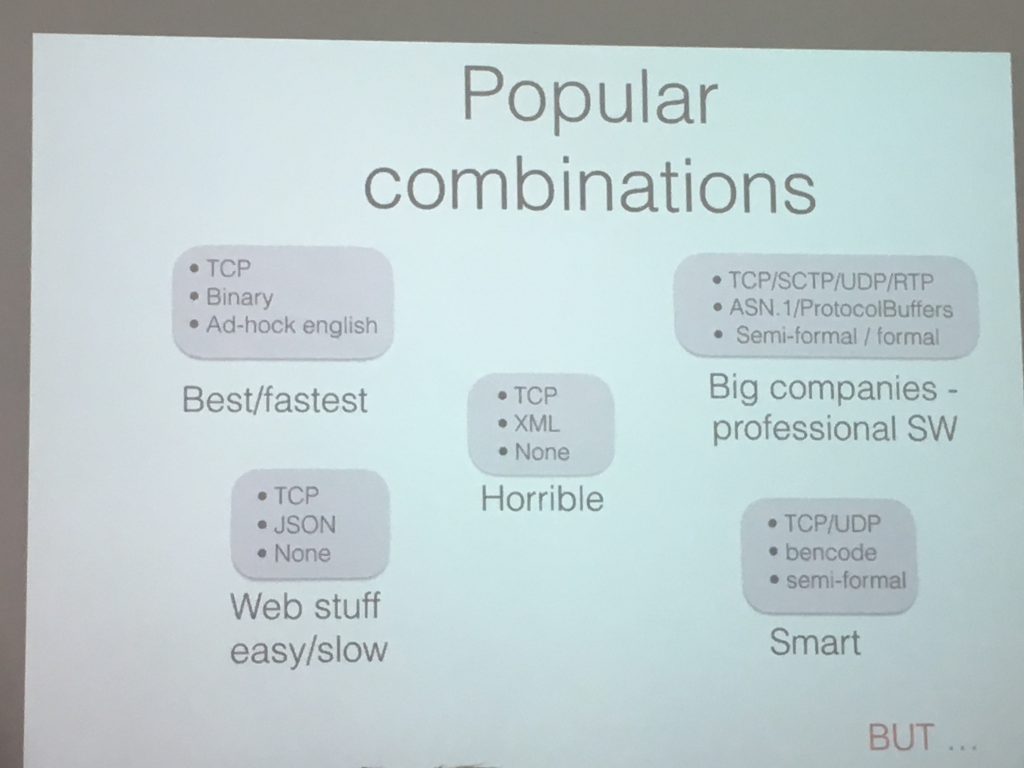 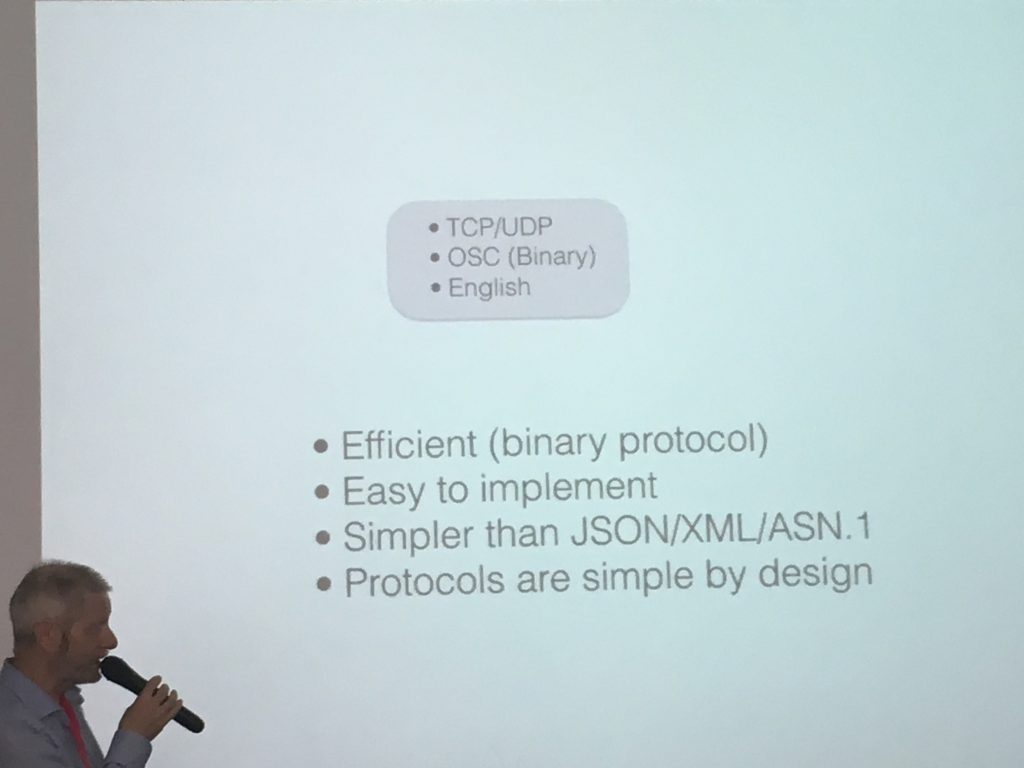 Joe picked OSC over TCP/UPD with some English to describe it. OSC is a very simple encoding - and it has “simplicity by design”, as Joe said, “if you can’t create complex data structures, the interface will be simple and easy to understand”.

"if you can't create complex data structures, the interface will be simple and easy to understand"

Which is another way worth remebering. Complicated systems are easy - you just keep adding stuff. Simple systems are difficult to make.

I think thou - if one thing should be remembered from this talk it’s fact, that we should be able to understand the system by looking on the messages going in and out.

Adopting Elixir in a 10 Year Old Codebase by Michael Klishin

While it seems like adding Elixir to some Ruby ecosystem, it was actually using Elixir in Erlang project. They did a CLI tool in Elixir as a “check” with ~8k LOC, ~750 tests and 70 CL commands available.

I will just point out good:

And bad things he learned:

Overall Michael feels like Elixir was worth adopting as sees a bright future for it - and you can utilize it even without agents, macros and sweet libs. He was even more optimistic for Elixir than for Erlang itself.

A Little Replica of the Internet in Elixir by Ju Liu

He describes himself as a Mad Scientist - and, boy, he is!

Basically it was a little trivia on the Internet and his attempt to do a small replica of it’s routing system using Elixir (and nerves). He had 2 RP3s connected, simulating North America and Europe with routing links. There’s a bit of how the Internet works and how it connects - he used that common knowledge to simulate it and it worked like a charm. There a code online if you want to look at it! 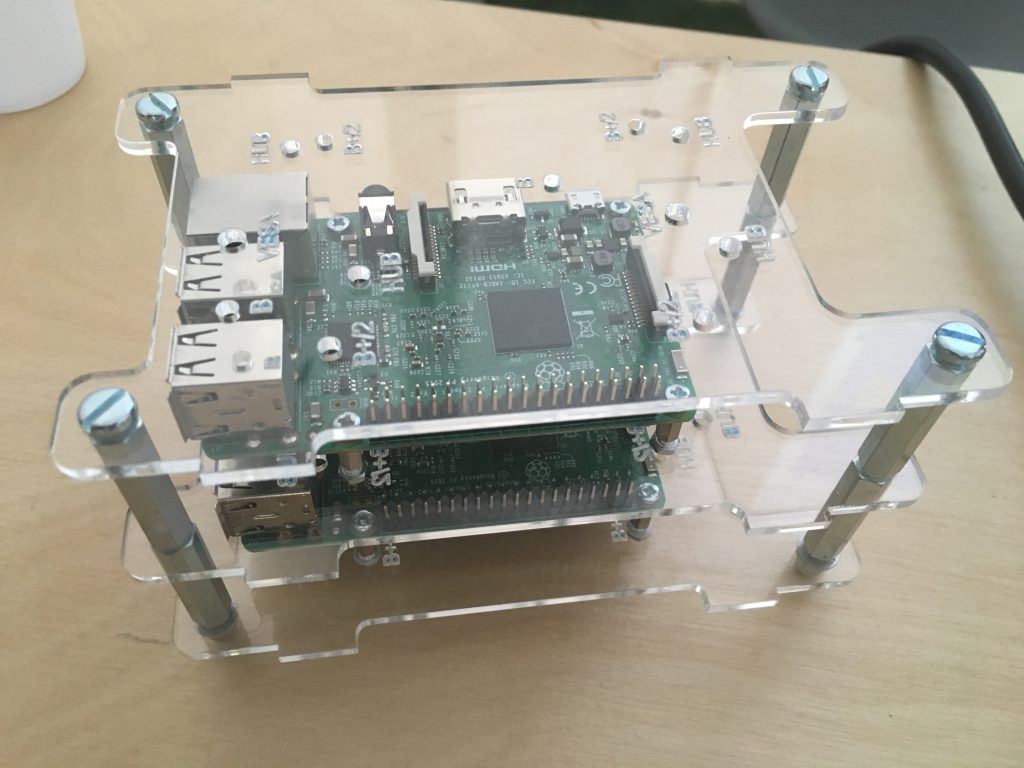 The real show started when he took the router, connected third Rasp and added Asia - it all worked! It was a nice show for the Nerves project to show what you can do with them. Funny thing - the most problems, and the slowest part was HTML+JS frontend where all the arrows where hacked as separate CSS elements - so it crashed when connection number rose. Still, great project and you can look at it on github!

Embrace the Database with Ecto by Josh Branchaud

Basically it was how to use the Ecto and how to query the database. I really don’t know if it was the high temperature in the room, or it was just quite obvious to me - but I cannot say that I didn’t find anything at all - there was one statement that I won’t say if I find true or false - because it’s strengh is that it provokes some interesting conversations:

Monitoring and Pre-emptive support: The road to five nines on the Beam by Francesco Cesarini

It was a great talk with a lot of focusing on “no single point of failure” “we need at least 2 of everything”. He showed 2 types of monitoring usefulness - you can prevent failures, or do quick post-mortems. With monitoring you can prove your innocence in 1.5 minutes - without trying to replicate the bug and trying to debug. While there’s a lot to be said - he said so many cool stories I guess you have to go and give it a listen yourself - this one seems almost identical.

And this was it - it was a great experience and possibility to talk with those people was sometimes eye-opening.